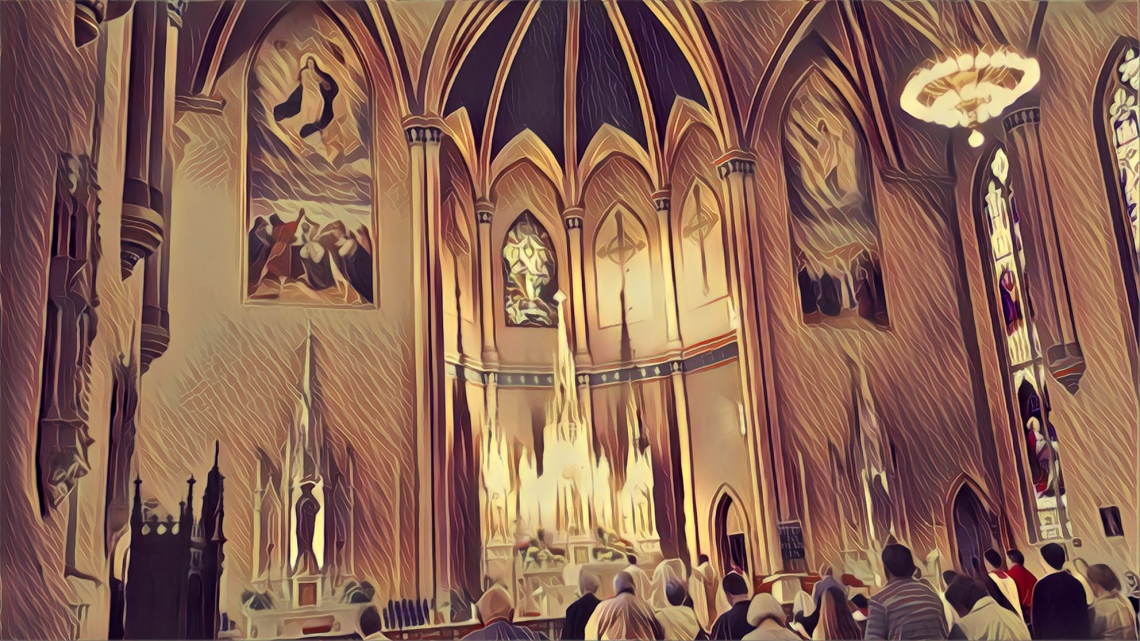 It must have been the fall of 1955. After two years of me fighting it off, my parents had succeeded in enrolling me into catechism classes at Our Lady of Whatever-It-Was Catholic Church, roughly 5 miles from home in Hampton, New Hampshire.

If you’ve grown up in some other religious tradition, you may want to know that catechism is much like Sunday school, only a little more formal, and because of the nuns who taught it, much scarier. My mother was an Episcopalian, a theological compromise she concocted between the Congregational Baptist tradition of her parents and her husband’s Catholicism; it’s a long story for another time.

I was sort of a token rich kid in our hometown of Seabrook. It isn’t that we had inherited wealth or anything like it, but my dad owned a white-tablecloth restaurant that was doing quite well during the 1950s, thank you. The surrounding town was low- to middle-working-class — the men were either lobster fishermen or they worked in one of the three shoe factories within the town limits.

The kids on the other side of the tracks hated me. They hated my clothes. I was the only kid in the class photos with a blazer and creased slacks. They hated the cars that picked me up and dropped me off when I refused to ride the bus with the little Visigoths. They hated me singing in class. (Yes, I was that kind of nerd.) They hated the lobster-salad sandwiches in my fancy leather lunchbox. They had peanut butter in a paper bag. And riding my bike to school? Out of the question. There were parts of Railroad Avenue that presented a gantlet of bullies. I might have made it to school, but I and my chrome-plated Schwinn would likely be dripping with vegetal detritus. It was much easier (for me) to have Frank, our company handyman, drive me to school in my mother’s Caddy.

Now, I need to tell you about my Saturday mornings. In the first and second grades, Saturday mornings took me back to a toddler’s sense of “what’s next.” I preferred my time to be unstructured, of course. I was free; free to rearrange the den furniture into a fort. Free to break a thermometer and experiment with the little balls of mercury. It was as if I intuited at age 8 that freedom to roam would make me a more creative, fulfilled adult.

But, a confrontation loomed in the near future. I had a bull’s-eye on my back. And the people who ran Our Lady of the Midlife Crisis Catholic Church held the bow and arrow. My father had promised a priest that if they let him marry this Protestant woman, he would see to it that his children were instructed in whatever the Catholic Church had to teach. Alarm bells were going off.

So, early in my third school year, my parents ripped the television control knobs from my bleeding hands on the first Saturday morning catechism classes began at Our Lady of You-Know-the-Drill. I sat surrounded by first-graders. Sister Granulata’s eyes wandered across the innocent faces and little plaid jackets. When she got to me, her double take was worthy of Morey Amsterdam. “You’re big for your age, aren’t you?”

I knew to call her Sister only because the little suck-up sitting next to me had already spoken to her. She set her questions about me aside for a while as we dove into our first-grade edition of the Baltimore Catechism. The questions and answers are on the “See Jane run” level, except that Jane is God and Spot is Jesus.

By the third Saturday, the Holy Spirit had found me out, and placed me with the other third-graders. Sister Impregnata taught this class. She did so with a yardstick in her right hand at all times. She had no interest in measuring anything. Rather it was a weapon … with medieval provenance. For the first time in my life, I found no impulse within me to ask the teacher if I could sing for the class. Singing was a way to get attention. In Sister’s class, attention was only something to be avoided.

Unfortunately for everyone involved, my reputation as a singer followed me from school to church. Ten minutes into this class, Father Casey came to the door to ask Sister Weaponata if she could spare me. This rhetorical question took her by surprise. She didn’t like or trust surprises; they were bad for her gallbladder. But she acquiesced to a higher power. Father Casey wiggled his finger at me. I walked/ran in his wake from the church’s basement up the stairs to the back of the sanctuary. At first, I thought he was going to throw me out of the heavy front doors. I was prepared for that. Forever banished. I could live with it. But nooooo. We took the next flight of stairs to the choir loft. There, I was surprised to see a group of about 15 older kids, all bigger than me. They turned to look at me in one motion. Apparently I was expected. See, that’s what bugs me about the Catholic Church: They’re always springing unpleasant stuff on you, like limbo and bingo (and Groucho and Harpo).

“Here he is, Mrs. Cunningham. He’s all yours,” Father Casey called out over my head. A large, middle-aged woman wearing a purple straw hat sat at a cascade of keyboards, with enough knobs and levers to control a flight to Saturn. She pointed at me and asked, ‘What’s your name, boy?” Half-question, half-challenge. “Gerard Joseph Dionne.” I have no idea why I gave her my full name. A couple of the biggest girls giggled. “Well, come here.” I approached. She was seated on a raised platform, which put me at eye level with her derriere. “Do you know this?” Sheet music slid down between her tush and my eyes. Except from a distance, I had never really considered sheet music before. But, I read the title, “Faith of Our Fathers.” It was familiar; I had heard it at Mass many times. “I think so,” I said. Her intro was the last few bars of the refrain. She paused with a big, fat fermata and looked down at me. Showtime.

I started singing. It was high; the key was uncomfortably high for me. So, I shifted gears and began to belt it out full voice, making it much easier. But there was a high note lurking in the refrain. I stopped. Behind me, I heard, ‘What a beautiful voice.” For a second, I didn’t feel afraid. Then Mrs. Cunningham asked me why I stopped. I told her it was too high and asked if she could transpose it down for me. In a rapid-fire staccato, I explained that I had an organist who worked with me as an accompanist and wrote my arrangements. “Do you know Peg Norton?” I asked. “She’s from Newburyport, and she transposes all my music for me.” I suddenly realize Mrs. Cunningham is staring at me. After a pause that felt like a full minute, she looked back at her music, then at me, then back to the music. She reached for the book and smoothed out some wrinkles. Her smoothing motion came dangerously close to tearing the page. After a deep breath, she ventured, “Let’s try another, shall we,” trying to sound perky. She hadn’t sounded perky for at least 20 years.

After another song with about the same outcome, she asked, “Do you know what falsetto is?” Now, I had heard of falsies. I knew from overheard conversation among the staff that more than one waitress in my dad’s restaurant utilized their benefit. This was a moment of true confusion for me. My 8-year-old self had enough situational awareness to not say what I was thinking. Mrs. Cunningham saved me from a deep embarrassment by demonstrating in her croaky voice the change from full voice to falsetto. Suddenly I understood. “But, I don’t sing that way,” I protested, thinking it would make a difference. “Let’s try it anyway,” she insisted. We did “Faith of Our Fathers” again, and this time I kept belting until I had no choice but to go into falsetto. My voice changed from filling the sanctuary to all but disappearing. As soon as the melody dropped a bit, I was back to full voice. “That was wonderful!” she said. “Do it just that way for Mass.” I looked at the floor. I’d rather be singing Eddie Fisher hits.

When Louise, my mum, picked me up, I climbed into the Coupe de Ville, but felt as though I just came back to Earth — the good, green Earth, with real air to breathe. I looked around at the fall colors, so different from the brown, gray and black of Our Lady of Clinical Depression. I played outside for the rest of the day, and rode my bike exactly where it took me, instead of someplace I was required to go. I forgot all about the morning session of catechism.

The next morning I arose carefree. I knew I would have to attend Mass with my dad and brothers. But, that was no big deal. I stood when everybody stood, knelt when everybody knelt. Piece of cake. At 10:55, we arrive at Our Lady of the Beer that Made Milwaukee Famous. As usual, Father Casey is standing in the parking lot to greet as many as he can. Rollie, my dad, and my brothers all offer a “Good morning, Father.” I wave and call out, “Hi.” Instantly, both brothers start in, “It’s ‘Good morning, Father,’ not ‘Hi,’ stupid.” They’re both admonishing me, smacking the back of my head. Father Casey tactfully averts his eyes. At this moment, it comes back to me. I think I’m due in the choir loft. But I say nothing. A few minutes into the Mass, I turned toward the loft. All those big kids I saw yesterday were there, singing away. I guess if I’m just quiet, this will pass. At the end of Mass, we all piled in the car and went home. I had heard about the Inquisition in some history lesson. I’m wondering if that will happen to me. As he drove, my dad said: “Why do you keep looking behind us? Do you think someone’s coming to get you?” Actually, that’s exactly what I thought.

Fast-forward about six weeks. I’m in my classroom at school. Mrs. Ackerman is sick today and we have a substitute. The lady writes her name on the board — Mrs. Cunningham. I sink into my seat, trying to shrink so small she can’t see me. And it works for about an hour. But, later, as we quietly fill in the blanks of some workbook, she slowly walks the aisles among us. There’s no avoiding this. Here she comes. “I know you, don’t I? You were supposed to sing at Mass a few weeks ago.” There’s a prosecutorial ardor building in her voice. “What happened to you?” A couple of classmates turn around to see who she’s talking to. I look around, too, as if she’s talking to some other kid. Then the lamest thing the world has ever heard came out of my mouth, “I didn’t know I was s’posed to.” She turned to stone — had no idea how to respond to that. Finally, she said, “Well, we missed you.” My parents never had a clue any of this happened, except for the “building a fort out of den furniture” part. 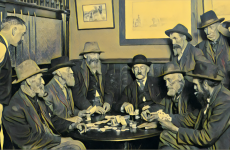 Last Pieces of the Puzzle 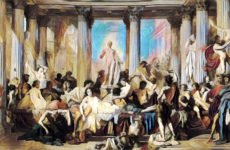